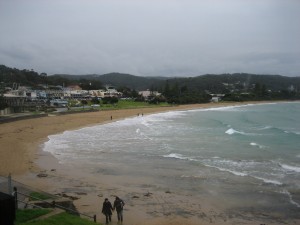 Brad and I recently spent the weekend in Lorne, which is a town about 2 hours out of Melbourne on the Great Ocean Road. When we did a day tour of the G-O-R early in our Australia stay we just drove through Lorne but it looked so adorable I wanted to go back! 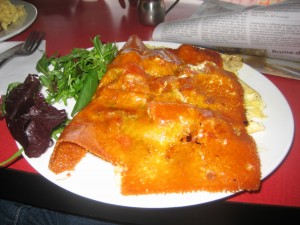 Look at that cheese! Oh baby!

I had great hopes for some hiking to see the forests and waterfalls in the area but the weather had other plans. We were really right along the coast and about 90% of the time we were there we had a lovely storm. Pretty much a hurricane. Rain and wind like there was no tomorrow. So we watched some footy, ate and read a lot. And I had a nap. It was a lovely weekend to relax at least.

So if you happen to visit Lorne, based on my experiences I recommend you eat at Kafe Kaos for breakfast and get the focaccia that’s smothered in cheese or try the River Tea House and have the fruit toast with brie and stay at The Shed (it’s a cottage with a little kitchen and it was ADORABLE). And you can skip the Lorne Hotel. Bleh. And maybe visit in the summer and not the winter! haha 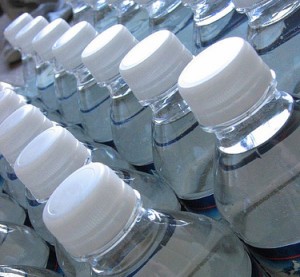 One argument in favour of the ban address the carbon footprint of bottled water. Plastic bottles are a petroleum product (remember the earlier post about plastic never going away? eep!) and the majority of them do not get recycled but end up in the landfill.

The town is going to carry a line of refillable water bottles that say “Bundy on Tap” and provide filtered water stations where you can still them up. I want one!

Why pay money for something you can get for free? Many, many towns and cities have perfectly fine water straight from the tap. Also, some of that bottled water you’re buying is just tap water anyway. It’s not from some fancy spring the Swiss Alps. Bottled water companies have pulled a massive joke on consumers. Gotcha! Well gotcha them back!

Save money and the environment by brining your own bottle and filling it up as you go!  Try a Klean Kanteen…they won’t leech icky chemicals into your water. 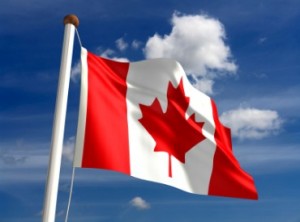 Out of all the G8 countries, Canada has been ranked the lowest for it’s actions on climate change. *sigh*

I think many Canadians feel Canada is a green country because it has so much green space…but that’s not what counts. Are we taking care of that green space? The survey thinks not enough.

Our emissions per person are among the highest in the world. The conservative government just hasn’t stepped up to the plate.

As Canadians we need to put climate change higher up on the priorities list. And I think it is for a lot of Canadians. So make the effort to let the government know. It would only take a few minutes for you to look up the email of your MP and send them a note that you’re worried about the climate and are upset at our low ranking among the G8. Or email the PM himself at pm@pm.gc.ca. Tell them you want the environment to become a key issue of the government.

If you want you can use this template I modified from a website for a campaign for the Australian government. Just sign your name at the end!

I’m writing you about Canada’s climate change policies, because I am deeply concerned about the future of our planet, not just for myself, but even more importantly, for Canada’s children and future generations, because they will be more seriously affected than us by climate change impacts.

The repeated news of changes in Canada’s north does not allow us to ignore climate change any longer. The melting of glaciers and the altered hunting grounds of polar bears show us that this is a real issue with real consequences for our people.