There’s a stew of claims about the adverse health effects of deodorant. Did you know that Alzheimer’s patients have higher than normal concentrations of aluminum in their brain tissue? Did you know that antiperspirants use aluminum to close your pores so you don’t sweat? 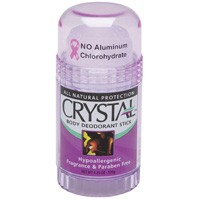 Now, there’s no clear evidence that shows that the aluminum in your brain got there by being absorbed  through your armpits, or that aluminum is a cause of Alzheimer’s, but it makes you think. Plus the mining of aluminum is definitely not a good thing for the environment. There’s also chemical fragrances, formaldehyde (the stuff your frogs were in before you dissected them in grade 11), and talc. Talc was exposed as being illegally mined from an Indian wildlife sanctuary in 2003 and being sold to companiess like Unilever, which owns the Axe and Degree brands.

I started using Crystal Body Deodorant. It’s made from Ammonium Alum, a rock salt. It leaves a salt film on your skin that stops bacteria from growing, and they’re the ones that stink. It’s working for me; I know because I forgot to put it on one day. I recommend re-applying if you put it on in the morning and are going out again at night, it doesn’t seem to last as long as conventional stuff. It was more expensive than conventional sticks as well, but I have a feeling it’s going to last a long time. It seems to get used up slower than a roll-on or a regular stick so I expect it will work out on the plus financially by the time you need to get a new rock.

** This does not stop you from sweating. Just from stinking. **

Thanks to the book Ecoholic by Adria Vasil, where I got my info for this post. It’s a great book for those concerned about what’s going in/on/around their bodies and what every thing they do does to the planet and how to fix it!