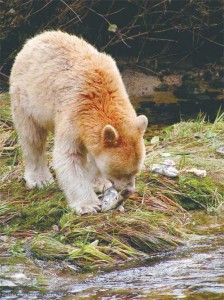 A real live spirit bear...who's protecting it's habitat? Not Canada

I know, I know. There’s already been a tonne of blog posts and tweets about the environmentalism of the Olympics. However, I believe that when an issue is important, every voice counts. The more voices, the more the people in charge are forced to take notice. So take notice Ottawa!

But I want to focus on the big picture. There’s the frequently played “Beautiful British Columbia” commercial showing Ryan Reynolds enjoying a campfire in the forest, there’s the high impact images of salmon and old growth forests at the opening ceremonies, there’s the overload of images of mountains, oceans, trees and wildlife around every corner. We’re showing the world just how much we love our nature, how much we cherish what we’ve been gifted by geography.

Liars! We present this image to the world but we don’t live up to it at all. This article in the Vancouver Sun sums things up pretty well.

What a majestic representation of the salmon running at the opening ceremonies. According to the Vancouver Sun, 38 salmon runs in BC are endangered. Yet fishing of salmon runs still gets approved due to their commercial value, even those on the brink of becoming endangered or extinct. These runs are also in danger of genetic contamination by escaped farmed salmon (which are Atlantic salmon) or infection by lice picked up when swimming near salmon farms. Drastic changes are needed in the salmon fishery to ensure this symbolic animal does not go extinct.

Great display of the glory of the old growth forests. Logging of old growth stands is happening right now. The pockets that exist are getting fewer and far between. These stands represent a structure that can’t be re-grown in a decade or two. We’re talking hundreds of years.

And then there’s Canada’s environmental track record in general. Not so good. Just because we have a lot of nature and not so many people doesn’t give us a free ride. We consume pretty much the same as America per capita, produce the same amount of GHGs per capita.

Canadians love being associated with nature. So let’s make sure we keep nature around. Let’s live up to what we project to the world. Let’s tell parliament we want to be a green country!