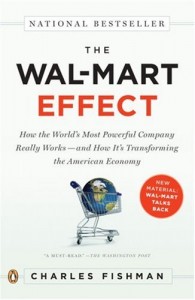 Well I’ve finally finished reading The Wal-Mart Effect. This book first came out in 2005, so I’m a bit behind and the information is a bit out of date. However, I do recommend reading this book, especially if you’re a Wal-Mart shopper.

Now I don’t want to say never shop at Wal-Mart. I’ve shopped at Wal-Mart and there was a time in my life where if I needed a cheese grater, or towels, I could only really afford to shop at Wal-Mart (ok, maybe I’m still in this stage but I’ve made due without Wal-Mart for a couple years now).  But I will say THINK about it when you shop at Wal-Mart.

Just to say something good about Wal-Mart…do you remember when deodorant came in boxes? It doesn’t any more. Wal-Mart made that happen, saving countless trees from being harvested to make deodorant boxes. Why did Wal-Mart do this? Each box cost 5 cents. They asked their suppliers to take out the box so Wal-Mart pays 5 cents less for each one bought, plus less weight to ship saving shipping costs. That’s a lot of saving when you think about how many people have deodorant that they buy 3 or 4 times a year. So they didn’t do it for the environment, but it worked out well anyway.

But what else happens when you want to squeeze 2 or 3 cents less per item from your suppliers? Well maybe the supplier has to use a cheaper material. Maybe they skip employee raises this year.  Maybe, if you ask them over and over to find a way to take 2 or 3 cents off per item (which Wal-Mart does, often, and with a non-negotiable attitude), the supplier has to move it’s factory to China or Mexico.

The Wal-Mart Effect has a story of a company or two that went through each one of those steps. It has stories of real people, like the women from Bangladesh talking about factory conditions where if you made a mistake sewing a pair of pants the supervisors beat you with the pants. How does that make you feel about buying those pants for $20 at Wal-Mart? Not so great a deal anymore, is it?

Wal-Mart does do factory inspections overseas. They do a lot of them. But they also have a lot of factories that supply them and when you push and push to get cheaper products, things happen at those factories that Wal-Mart just can’t catch.

I don’t want to make this a super long post, so I can’t even really scratch the surface of the information in the book. There is also a very interesting afterward that talks of the initiatives Wal-Mart is taking to improve their image, such as cutting greenhouse emissions from all stores by 20% by 2012. Pretty impressive. But will they actually do it? I hope so. As much as we love to hate Wal-Mart, it is a global force that won’t be going away anytime soon and it affects many aspects of our everyday lives whether you shop there or not.