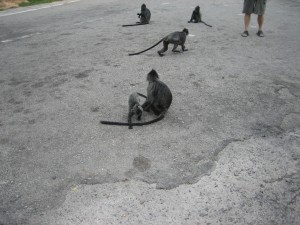 A great benefit of living in Australia is you can get cheap flights to South East Asia. Hooray! So that is why Brad and I took fours days and flew to Kuala Lumpur (KL).

It was an amazing few days. The first day was spent checking out the city. The largest chunk of time was in Chinatown…eating, drinking and bartering. Petaling Street is a bustling street bazaar where I felt I needed a shirt that read “No I don’t want any DVDs”. We found that, in general, the people were much more relaxed than in China. They still try to call you into their stalls to look at their goods but they are no where near as pushy as the guys in China.

And we saw monkeys hanging out outside the Planetarium. Sweet.

The next day we took a bus to Melaka, a historic-type town about 2 hours south of KL. It was air conditioned. Awesome. While there we learned all about the Portuguese/Dutch/British colonizations. Melaka was a bustling trade hub run by local Sultans till the Europeans showed up around 1500 and basically messed it up. Melaka never recovered the glory of pre-European arrival. Way to go guys. Yeesh. We saw a church built in 1521, bits of an old fortress, and lots of dioramas. Malaysia really likes dioramas. The bus back to KL was not air conditioned. Boo. 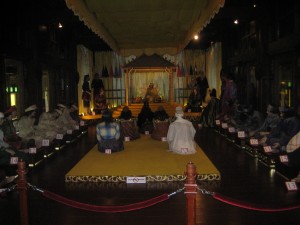 Diorama number 85 of a sultans court

Took another air conditioned bus to Kuala Selangor, about 2 hours west of KL. Saw more monkeys crossing the road. Sweet. We went to see a humongous firefly colony inhabiting the banks of a near by river. It was beautiful, but no photos turned out. Boo. After spending the night in the mosquito forest…whoops I mean the mangrove forest…park, we checked out some more Dutch ruins (and saw more monkeys…these guys could take over the country!) including an execution rock and poison well. Those guys knew how to get things done. Walked around the very nice mangrove forest (more details in a later post…stay tuned!) and fed the mosquitoes. Then one non-air conditioned bus back to the city. 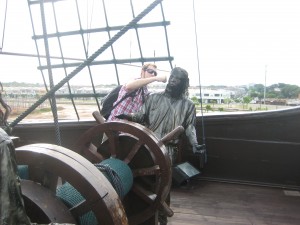 Food was fantastic. We made an effort to find places that looked a bit like they could be a hidden treasure (ie down alleys, stalls at the markets and places filled with locals and not Westerners). It proved to be a good strategy and my belly was very happy at the end.

In conclusion, Malaysia is very humid and a delight. When you visit cross your fingers for air conditioned buses and if a restaurant/stall only sells one thing they’re probably really good at making that one thing, trust them. 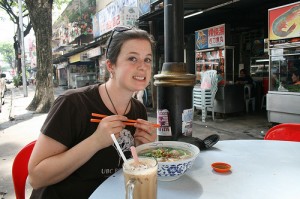