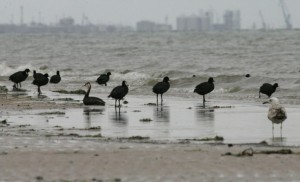 Exxon Mobil pleaded guilty to the deaths of 85 migratory birds. The birds died after landing in natural gas well reserves and waste water. Somehow I find 85 to seem like a fairly small number, considering the deaths took place in several states over five years (2004-2009). But at least it’s something.

Exxon Mobil is giving $600 000 for the preservation of wetlands as a result of the guilty plea and promising to improve facilities to prevent this from happening in the future. $600 000 is pocket change for a corporation this large.

While it is very refreshing to see a company actually admit it did something wrong to the environment, I find these days that I have such a high degree of skepticism about anything that happens that in anyway involves a corporation. They so often seem above the law and social norms.

I recommend watching The Corporation. It was very eye-opening for me. Happy watching!