I recently listened to the March 28 2009 episode of Quirks and Quarks from the CBC. It was Nine-and-a-half Technologies to Save the World. Very interesting, very sci-fi.

The second one really hit home for me, being a vegetarian. In vitro meat. If you hate biology (that’s silly, how could you!), in vitro means within the glass in Latin, aka in a petri dish in a lab. Yup, that’s right, they can grow meat in a dish from stem cells. Tastes like meat, looks like (ground) meat (we’re not talking T-bones here). Some links about it here and here.

You’re thinking, EW, right? So did I. Then I though about how we get meat now. A barn, stacked ceiling high with cages that go row upon row to maximize the amount of chickens in one barn. Chickens that may or may not have enough room to turn around in the cage. They’re being pumped full of antibiotics to stop them from getting sick in conditions that should cause a massive outbreak of something every 5 minutes. EW. How is that natural?

So, ok, why does that make in vitro better? Well, the main issue brought up by Jason Matheny from John Hopkins University (the one interviewed on Quirks and Quarks) was health. You can make this meat low in bad fats and high in good fats, like omega-3s, helping to reduce things like heart disease. It would also benefit the environment, producing less greenhouse gases, using less farm land, and you wouldn’t be ingesting all the antibiotics and drugs you do now. 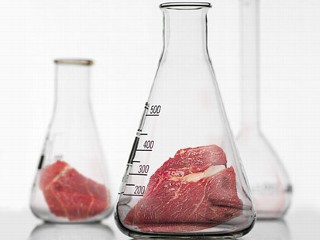 Plus it removes any question of ethical treatment of animals.

Now this isn’t about to appear on your supermarket shelf or anything tomorrow. Right now it’s pretty costly and can’t be made in large batches effectively. But they’re working on it!

Just think about it. Would you eat in vitro meat?