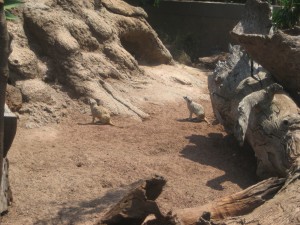 Brad and I went to the Melbourne Zoo not too long ago. We were able to see a slew of native animals; Kangaroos, Wombats, and even a platypus! There was also lots of non-native species. I saw lions, gorillas, elephants, and meerkats (which were the cutest, see pictures).

I’m a bit on the fence about zoos. I’m not for keeping animals in unnatural, tiny settings, not letting them hunt and socialize like they do in nature. I remember going to the Oaklawn Farm Zoo in Nova Scotia for a biology class. They boast the world’s largest lion. As in weight. This lion was seriously overweight. It was sad to see. And this was on the main sign going into the zoo!

However, many zoos have animals that were rescued and can’t be released. This is often the case with birds. Other zoos really focus on pushing the message of conservation. “Hey Kids, love the river otters? Help protect our rivers!”, etc. I was really impressed with the aquarium in Shanghai, which I felt had a great focus on conservation.
As for the Melbourne Zoo, there was some conservation issues addressed, but nearly as much as I would have like to have seen.
So next time you make a Sunday trip to the zoo, think about what the zoo means for the animals and maybe decide not to visit those zoos without a rescue/conservation emphasis. Support things that are good for animals and good for the environment! 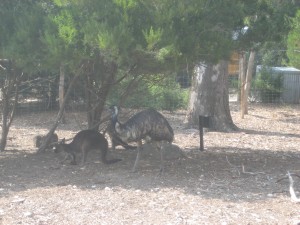 Roos and an Emu!