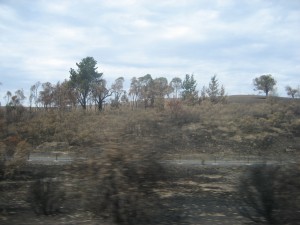 The other weekend we drove from Melbourne to Canberra. Along the way we went through the areas affected by the recent bushfires that have been burning for weeks. It was really amazing to see.

The area we saw seemed massive, and we only saw the damage on the sides of the highway. It went on for kilometres. As you can see from the blurry picture taken from the car window. the trees still have leaves but the ground is black and nothing is growing below the tree canopy. You could see houses that had survived, with blackened groud all around, right beside spaces that had one been a house but now there was nothing left.

I have never seen anything like it. You could tell just how hot and fast the fire burned. I couldn’t imagine being one of the people who stayed to protect their home or the people trying to escape seeing the fire front chasing after their vehicle.

Australia is not taking climate change well. Twelve years into this drought, bushfires and water shortages happen all the time. There’s flooding in the north. I didn’t really realize how bad it was when I was living in Canada. Why hasn’t Australia become the poster nation for climate change? Why aren’t Australia’s, who should be some of the most aware of the danagers of climate change, taking more steps to slow it down? They’re great about saving water, but they should be banging down the door of the rest of the world shouting “Hello! A little help here?” They should have solar panels on every roof! They should have pulled out all the stops years ago. I did see an ad on TV the other day saying a vegetarian diet will help reduce GHGs. Now that would never be allowed to air in Canada…would it Stephen Harper?